The East Coast Main Line route is one of the major railway arteries in the UK.

It is a 393 mile track. The route has its southern terminus at London Kings Cross, a historic station from which travellers can take a short walk to nearby St Pancras for the Eurostar service, and the north terminal reaches as far up as Inverness, with Aberdeen at the end of an alternative branch.

In terms of history the East Coast Main Line consists of some of the oldest lines in the country, and has seen some of the most famous names in UK railway history serve its customers.

The Flying Scotsman ran this route as did the famous Mallard, the train that set the world speed record for steam power at 126 mph on a section of the line itself.

While it is generally considered that the East Coast Main Line begins in London and ends in Edinburgh, there are many addition links, including those already mentioned, that make it an essential transport route in many ways.

Alongside the main line from Kings Cross there is a second artery of the route that heads slightly west from Doncaster, in Yorkshire, and heads across country to its main destination at Leeds.

From here there is a link back to York, and several branch lines that serve towns such as Harrogate and Skipton, all of which are popular tourist destinations. 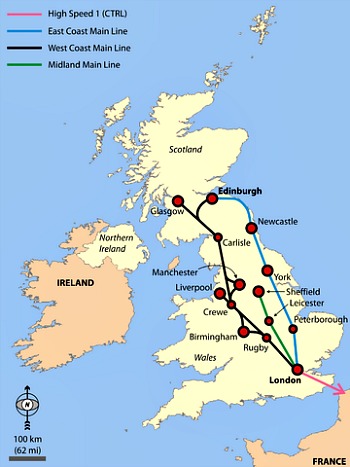 The East Coast Main Line is part of the Network rail route G.

It's main line runs between London King's Cross and Edinburgh Waverley stations. It covers, along the way:

Further north and the East Coast Train Line takes passengers at high speed - the line runs the 125mph InterCity locomotives - to the historic cathedral city of Durham, a place well worth a visit for its amazing architecture and the view of the cathedral itself as you draw into the station.

Just before Durham the line passes through Darlington. This is a town synonymous with the development of the railways, and it was here that the first public railway - the Stockton and Darlington line - was opened in 1825.

A commemorative sign can be viewed trackside as the Main Line now uses some of the original route.

North of Durham the East Coast Rail Line runs into Newcastle upon Tyne, taking in the majestic High Level Bridge across the Tyne designed by the legendary George Stephenson.

The Newcastle Central Station is regarded as a masterpiece of railway architecture with its colossal curved roof, and is worth a stop to visit The Centurion, a bar within the station itself that is located in the original and beautifully restored Victorian-era First Class Lounge.

The line heads north through a region that was particularly blighted by the Beeching cuts, through the pretty market town of Morpeth. It is here that there is a notoriously tight curve in the line that has been the scene of at least five notable accidents - the first in 1877 and the latest as recently as 1994 - that have led to this section of the line being subject to speed restrictions.

The East Coast Main Line crosses the border at Berwick upon Tweed, a beautiful and historic town with much to offer including fortified walls, and on through some of the most spectacular scenery on the route to the Scottish capital Edinburgh.

The line crosses the stunning Forth Rail Bridge, an astonishing example of railway architecture, and by heading further on the Dundee line you can also take in the spectacular Tay Bridge with its unique curved aspect.

The Dundee artery eventually terminates at Aberdeen, while the Inverness line and Glasgow Central connections are also available to travellers on the route.

They took over from Virgin Trains.

Other operators on this route are:

You can get East Coast Main Line tickets from TrainLine here on all routes.

Get Train Times And Cheap Tickets

There is always great savings to be made if you buy your train ticket directly from the East Coast Main Line website. You would be able to take advantage of latest deals and discounts there.

You could also save up to 70% or more on your rail tickets by getting advance train tickets using Thetrainline Best Fare Finder. An average savings of 43% is guaranteed compared to your buying your tickets from the train station on the day of travelling.

You could get even more cheap train tickets on the East Coast Main Line if you get a railcard. You save a further 30% (in addition to those made by getting your tickets as suggested above) when you get an annual railcard costing about £30. You will be able to travel with other passengers who will also enjoy the discount of a third off the cost of their tickets each.

Booking your journey well in advance and choosing to travel at night or Off Peak times can greatly save you more on travel cost. You can check train times and book your ticket on the East Coast Main Line trains here.

There are many connecting services to other routes across the country, making the East Coast Rail Main Line one of the most popular railway lines in the UK.