Get cheap tickets on the CrossCountry trains. Get train times and tickets here; whether from Banbury to Oxford, Peterborough to Leicester, Newcastle to Edinburgh Waverley, Exeter St Davids to Plymouth, Darlington to York or Birmingham New Street to Cheltenham Spa and several other destinations from the South of England to Aberdeen, in the North East of Scotland.

The network of routes covered by Cross Country span the country from a base in Birmingham and offer connections as far afield as Edinburgh.

CrossCountry - XC Trains - offers more railway routes than any other operator in the country, and utilizes many of the best used lines in the country. Routes cross the UK from a central point in Birmingham, from which passengers can travel in all directions.

CrossCountry does not run services into London itself - although there are routes to Stansted Airport and Reading - but its selection of routes takes in some of the most popular tourist destinations in the UK, both on the coast and inland. Starting at Birmingham, the main routes include the use of the East Coast Main Line route up the coast to Newcastle upon Tyne, Scottish capital Edinburgh and beyond, plus a route in the opposite direction that terminates in the South West Riviera area. 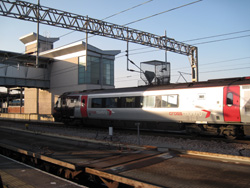 You can get really cheap train ticket on the Cross Country trains by buying your ticket well in advance and directly from their website here. They have frequent deals and special offers to help you save money on your rail travel.

You can also save an average of 43% on your train ticket or up to 70% by using Thetrainline Best Fare Finder to get you good deals. Passengers can find discounts by booking in groups (up to 9 adults), by booking well in advance or by taking advantages of some of the many special offers available across the seasons.

Their comprehensive site is easy to use and well presented, and is a convenient way of getting cheap rail fares for journeys in all quarters of the UK. You will pay no booking fees if you bought your ticket directly. 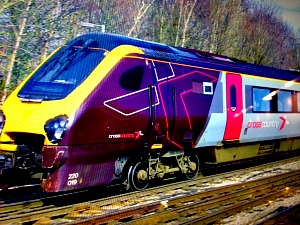 From Birmingham to the North

The routes involved to the North are varied. Heading through Wolverhampton passengers are taken through the Staffordshire countryside to the towns of Stafford and Stoke on Trent, and here there are plenty of tourist opportunities for those wishing to visit The Potteries region. Further north and the line heads into the beautiful scenery of Cheshire and the attractive towns of Congleton and Macclesfield which lie on the edge of the Peak District.

Alternatively, a branch just after Stafford takes trains to the historic railway town of Crewe and beyond to Wilmslow, with both lines converging at the attractive Victorian station at Stockport. The station itself lies a few yards from the beginning of the spectacular Stockport Viaduct. This amazing structure was - when it was completed in 1848 - the largest construction of its kind in the world, and remains one of Europe’s biggest brick built structures.

This line terminates at Manchester Piccadilly, and the city of Manchester is a lively place with many excellent shops, restaurants and nearby attractions, including the world famous Granada Studio tour.

Scotland and the North East

By heading out of Birmingham towards Derby passengers can head across country to Leicester and, beyond, to the historic city of Cambridge, or take a branch line to the ancient and very attractive city of Nottingham. The alternative is to take the route across the beautiful Peak District in Derbyshire - a route that features some of the most glorious scenery in the whole of the UK - and north to Sheffield, itself an interesting city with a rich industrial heritage, and from then on join the East Coast Main Line.

This route takes passengers through the beautiful cathedral city of Durham, the wonderful and railway rich city of Newcastle upon Tyne, famous for its seven bridges and exciting nightlife, and further north through Northumberland to cross the Scottish border at Berwick.

North of the border the route takes passengers to Edinburgh, a city that is simply not to be missed, and then either across the country to the cultural city of Glasgow, or north to the terminus at Aberdeen.

Birmingham to the South West

CrossCountry operates two routes from the Midlands to the south. One is a very attractive line that takes in the tourist city of Oxford, land of the Dreaming Spires, to the South Coast resort of Bournemouth, one of the region’s most popular seaside resorts.

The second route goes south west through Gloucester, from where trains can had to the Welsh capital Cardiff, or further south to Bristol and Exeter, and then on to the wonderful Devon and Cornwall peninsula, with the eventual terminus at the wonderful town of Penzance.